This Halloween I watched Alfred Hitchcock's movie The Birds (1963). I had seen parts of it before, but I realized that I had never seen the whole movie from beginning to end. I remember people telling me how much it frightened them, but I honestly didn't find it find it that scary and would have a hard time classifying it as a "horror" picture. The scenes where we are all waiting for the birds to attack are quite suspenseful.

It had its moments, and it was an enjoyable film overall, but I won't include 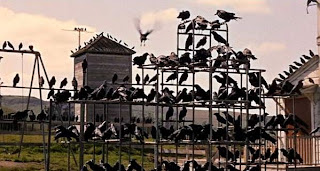 it in my any of my top-movies-to-see lists. My favorite scenes are the ones where the characters are walking to and from the school house with all of the ravens or crows perched on the monkey bars in the playground. Watching. Waiting. Creepy.

According to IMDB there is a remake in production that is due in theaters in 2009, starring Naomi Watts and George Clooney. It would be interesting to see with better special effects (visual and sound), but I don't have high hopes that it will be better as Hollywood doesn't have a great track record with remakes.

I searched for, found, and read the 1952 short story of the same name by Daphne du Maurier it was based on. I should say inspired by. Both had a coastal town attacked by birds, neither had an explanation for the birds behavior, and the endings of both left things unresolved. I am not saying that any of these are bad, it is just how it is.

Being a short story, it needed some padding to be a full length feature. Hitchcock added a few elements and made some changes that you typically find in movies made by Hollywood. Luckily he didn't slap on a happy ending or a pat explanation tied up in a nice little bow.

As to the additions and modifications, first there is a love interest. The book actually follows a man and his family and doesn't stray very far from his house the entire time. None of this man with a mysterious past (and possible mother issues), or single woman with too much money and time on her hands.

Second, the action was moved to the United States from Great Britain. Why we feel the need to Americanize things is beyond me. Orson Welles moved H.G. Wells' The War of the Worlds in his 1938 radio program, as did Steven Spielberg in the most recent movie version. The first Peter Pan (1924) movie based on J.M. Barries' play and book actually did the same, completely loosing the British elements that are core to the story (but doing a pretty good job with everything else). Maybe they don't believe that we would watch a movie that didn't have the United States as the center of the universe - saving the world.

The only thing that the book had more of than the movie is types of birds. Probably due to the cost of the special effects, the movie really only had seagulls and crows (or ravens), while the town in the book was being attacked by all types of birds, from the sparrows to raptors. In the original story the characters learned from the radio that similar events were taking place through out the country as well.

I thought the Simpson's might have done of spoof of The Birds, but I realized it was actually from an episode of Arthur (based on Marc Brown's children's books). In it Arthur, Buster and their friends all watch The Squirrels on TV and become frightened of squirrels. (It even had a scene with squirrels gathering on monkey bars in a school yard.)

I tried to think of some other books or movies with nameless flocks of birds and really couldn't come up with much. I just finished reading Sabriel (1995) by Garth Nix, Sabriel herself is attacked by a flock of dead, black birds who are being possessed by the spirit of a dead magician. There are also some scenes in The Messengers (2007) starring a pre-Twilight Kristen Stewart with black birds watching and eventually attacking.

So there you have it. If you haven't seen the The Birds, or if it has been a few years since you have, you could start a tradition of watching it on Thanksgiving - a holiday that is even more fitting than Halloween if you ask me. 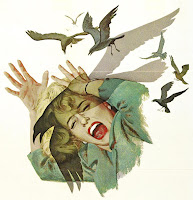 Posted by The Story Cottage at 10:17 PM No comments:

With the release of the Twilight movie this weekend, I thought I would share another thought I had on Breaking Dawn (2008).

I already talked about the Twilight series here. Quiet some time after I wrote that, something Stephenie put in her Breaking Dawn FAQ finally clicked. In the FAQ she explains that she originally wrote the series as two books - Twilight and Forever Dawn. After the success of Twilight, she wrote two more books, bringing the total to four in the series (so far).

What I realized is Stephenie allowed her characters to grow organically as she wrote New Moon and Eclipse. But with Breaking Dawn she was trying to bring the many of the story elements back to what was in her original Forever Dawn. Many of the characters evolved and grew in these two books and wouldn't be the same as they were in her first treatment. Stephenie still brought these characters back to many of the same situations with the same actions in her original version. This resulted in deeper and more complex characters being forced into roles, reactions, attitudes and outlooks that probably made more sense and felt more natural without the middle two books. This explains the disconnect that I, and many other readers, experienced in reading Breaking Dawn.

Now enjoy the Twilight event of the moment and feel free to let me know what you think of the movie if you see it (and if you have any more thoughts on Breaking Dawn, now that more time has passed).
Posted by The Story Cottage at 6:00 AM No comments:

Here we are less than a month since Halloween, and just over a month away from Christmas - two of the biggest holidays for candy sales. If you are already tired of sugar, or if you are looking for a way to enjoy your sweets vicariously for fewer physical side effects, there are several stories in which magical candy plays a major role.

on's Charlie and the Chocolate Factory in 2005 with Johnny Depp.

In 1971 the Willy Wonka Candy Company began. Eight years it later became part of Nestle, providing versions of the Everlasting Gobstopper and the Wonka Bar, among other treats. You can enter an online wacky Wonka world full of Oompa Loompas various games and activities at www.wonka.com.

In Dahl's book The Witches (1983), the witches insidious plan to rid the world of children involves setting up sweet shops and selling candy spiked with Formula 86 Delayed Action Mouse Maker. This was made into a film in 1990 with Angelica Huston as the Grand High Witch.

Hansel and Gretel were captured by the witch in the Brothers Grimm story with the house made of candy. You can read an annotated Hansel and Gretel here, as well as view lists of modern versions and similar tales from other cultures. (By the way, if you find the short story Crumbs, by Esther M. Friesner, in a collection and you enjoy reimagined fairy tales read it. It is a sequel of sorts to the original story involving descendants of the witch and the children with a different explanation of what happened and a twist.)
Joanne Harris published Chocolat in 1999, in which Vianne Rocher sets up a chocola 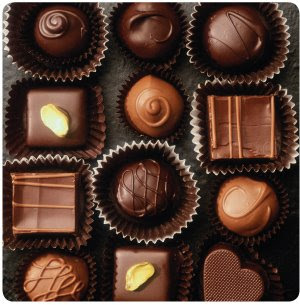 terie in a small French village and shares chocolates that seem to have unusual properties. Interestingly Johnny Depp played a gypsy in the movie in 2000. The sequel to the novel follows Vianne and her daughter Anouk in Paris years later. For some reason, in the U.K. the sequel's title is The Lollipop Shoes, while in the U.S. it is The Girl with No Shadow, losing any reference to candy.
Clover is always giving Levin Thumps candy with unusual side-effects in the uneven childrens' series by Obert Skye starting with Levin Thumps and the Gateway to Foo (2005).

Four children get involved in a war between magicians who make candy that gives the person eating it temporary, supernatural abilities in the highly enjoyable fantasy novel The Candy Shop War by Brandon Mull (2007).
Now, maybe you have read any of these books, or watched any of these movies by yourself, with friends, or with your family and you are now in the mood for some candy related activities. There is plenty you can do.

You can always play the almost 60 year old boardgame Candyland, especially if you don't mind the possibility of a never ending game trapsing through the Candy Cane Forest or the Molasses Swamp.

This time of the year, making gingerbread houses is always in fashion. 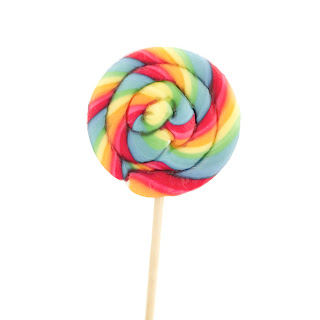 Go ahead and watch the 1939 film Bright Eyes staring Shirley Temple, and learn the lyrics to "On the Good Ship, Lollipop," which became her trademark song. (You probably won't be able to get the music out of your mind now. You are welcome.)

If you live somewhere along the Wasatch Front, this Friday and Saturday you can attend the 4th Annual Utah Chocolate Show and sample and purchase all kinds of chocolates. (Click here for more information.)

Now, if you are in Utah and looking for cheap (mostly free), candy-themed activities for all ages, here are some other places you can go and, in some instances, get free samples:

If you are in Las Vegas, you can visit M&M's World next to the MGM Hotel, and even watch a free 3-D movie starring Red and Yellow after making your way through three floors of M&M merchandise (click here for more information). You can also take a tour of Ethel's Chocolate Lounge in Henderson (click here for more about tours).

If you pace yourself, you should be able to read a book, watch a movie, then go on a tour or to an event every other month next year. Have a sweet 2009!
Posted by The Story Cottage at 12:00 AM No comments: